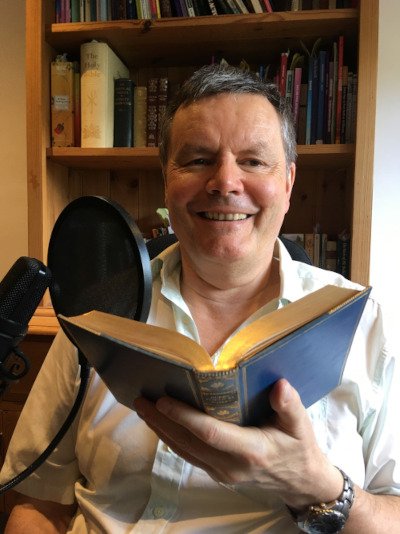 Listen To Poetry – How it happened!

Gerald: A couple of years ago I was thinking that it would be really good if there was a website where the emphasis was on listening to poetry and you could request to have a poem read. I assumed there were many sites like that already. I spent some time searching for variations of ‘listen to poetry’ and was surprised to find that there were many different websites to do with poetry but very few that had poems to listen to. A lot of what there was to listen to seemed limited, a bit disorganized and of very variable quality, including one site where a mechanical voice spoke the poems! I continued to think about it from time to time but kept it in the realms of a distant project in the future and never spoke to anybody about it.

Gerald: Then Coronavirus (COVID‑19) arrived. Our business (drama teaching and voice coaching) came to a dramatic halt and the whole country went into lockdown. Suddenly time and space were available in abundance and if ever there was an opportunity to put this into practice here was the chance. I finally took the step of talking about it to my old friend Paul Godden (artist and website designer) on whom any actual implementation of such a website would rest.

Gerald: He was encouraging but also very practical! We are both Pisceans in the astrological world but somewhere along the line Paul got an extra dollop of common sense and practical business acumen, not something Pisceans are known for! So he told me to put together a business plan and a mission statement! Blimey! Meanwhile he would look into the practical and technical issues of implementing such an idea. He also suggested I aim to record at least 100 poems by as many different poets as possible. The reason for this would be the promotion of any future site on various social media platforms – something I know very little about, I don’t even use a mobile phone! So here was a reality check – could I put my money where my mouth was?

Paul: In the first instance I just took a look around the subject to see how the problem could be ‘solved’ technically. Essentially a combination of technologies WordPress, Divi and Soundcloud.

Gerald: As we both came into the Coronavirus (COVID‑19) high-risk category I think we saw this as a kind of ‘pandemic offering’ since we were unable to volunteer to help people in other ways. Paul had a lull in his business and we egged each other on and the project began to take form.

Paul: I then decided to test Geralds metal. Was this just a pipe dream or did he really want to do it? Since we’ve got to the end of phase one the answer was yes he did really want to do it! Impressively he also had to buckle down and participate in the production of the website due to my work schedule. Not much downtime for me in the Lockdown.

Gerald: At the beginning I rather blithely thought that I could read a few poems and Paul would be able to just stick them on the Internet somehow! I was in for a rude awakening! I used to be involved in the IT world (about 20 years ago) but in my old age have become a bit of a technophobe. Paul would design and build the bones of the site but I would have to do the grunt work! Blimey with nobs on! So I had to learn WordPress, SoundCloud, GIMP and work with multiple pieces of software to start to put the website together. Now here we are with a first version about to hit the airwaves and we are about to find out whether there will be any interest in this at all.

Paul: I have to say Gerald was impressive in the main build stage. Although I had the time initially to build the basic structure of the site I quickly began to get more busy as we came out of lockdown and so Gerald had to step in and do all the scut work for the site.

Gerald: I would like to take this opportunity to thank my friend Paul who has made all this possible and has been a great source of support, encouragement, technical expertise and artistry throughout, as well as maintaining his sense of humour! We would both like to thank my son Laurence and his two cousins Florence and Rose Fausset for contributing artwork for some of the children’s buttons. We would like to thank Colleen Slater for the use of one of her photographs. We would also like to thank Lucia, my wife, for her encouragement and scrupulous editing of the site.

We hope you enjoy it.